The #24in48 has me revisiting my ongoing thoughts and challenges of productivity and time management. See for one weekend, I wanted to prioritize reading, but I didn’t manage to do it. Reading shared the spotlight with all the other mundane things that needed to be done. Sure they need to be done, but do they need to be done right now? I woke up thinking about how people one can’t do everything at the same time so choices must be made, priorities must be set.  I then found that just this morning Seth Godin had described this better than I would: Opportunity Costs Just Went Up, which, of course, I found while checking Twitter rather than getting up and writing this, which is what I claim to want to do. So in this case, kismet, but not most of the time. Why do I make the choices I do when I know they mean I’m not doing other things I want to be doing? Why am I on Twitter or any other app or website rather than doing any of the million other things that I want to be doing, including reading? Every time I read or listen an interview with a person who is considered prolific in their field, they say they don’t spend time on social media. I used to not spend time on social media. Until I was thirty years old, I barely watched tv. Coincidentally, this was the golden age of my reading life. Somehow social media and tv have become and addiction and I need to just stop. As Seth says: I could spend that time learning a new skill, or I could work on a creative project, I could go to the gym. It’s my choice and I need to own that choice.

What about you? Anyone kicked a bad habit and want to give advice on how?

As I often find, The Eagles have some wisdom to impart:

So you live day to day
And you dream about tomorrow, oh
And the hours go by like minutes
And the shadows come to stay
So you take a little something
To make them go away
I could have done so many things, baby
If I could only stop my mind
From wonderin’ what I left behind
And from worrying ’bout this wasted time

When you stayed up late finishing a book, then don’t up early to do other things you want to do but you’re exhausted anyway and you don’t feel one whit bad about it, well maybe half a whit.

You chose to watch tv, cook time intensive meals, spend time on social media or {insert however you’re spending your time here}. Do you really want to spend time in this cesspool? Facebook is giving your data away in outrageous ways. Someday there will be a breach and those New Year’s Eve pictures will be available for everyone to see, or worse used against you in some way. And do you really think retweeting articles or witty statements is going to change what is going on in the world? It’s not. If you care so passionately about a particular issue, get out there and organize, volunteer, find a job with an organization that will help make change and if that organization doesn’t exist, create one. If you don’t feel passionately about what you’re tweeting about, just stop and spend that time working on whatever it is that gives you a spark.

You chose to spend your time doing the things you say aren’t important over the things you think are important. You chose. You make the decision on how to spend your time, so pay attention to how you do. Write it down for a while and notice your patterns. Some things you will surely say you “must” do. Sure. I must go to work today. But in the long run, it’s my choice to stay at that job rather than figure out the work I really want to be doing and moving toward it. That seems daunting, so I’m starting by just committing to writing every day. Ok, I already wrote every day, but just bunk that no one sees, so I’m going to write every day and put it out there.

Oh, it won’t be easy.  Habits we want to change don’t go easily. They wrestle with our good intentions and sometimes they win. I just opened a site with an article about most searched for shows on Netflix by state. I must know!  Answer for my state is some show I’ve never heard of and whose title doesn’t inspire interest. But there is another show called The End of the F***ing World that intrigues several states. What is that about? I must find out, then add it to my list, then spend the rest of the week binging it!  Actually no I don’t. I chose not to do that. I chose to focus on what I’ve decided is important. You may make a different choice. If so I hope you enjoy The End of the F***ing World. But chose well, because we only have so much time. What do you want your life to be?

After I’m Gone by Laura Lippman

Also I did listen to part of The Death of Ivan Ilych in the car when I had to run a couple of errands.

I am super excited about this read-a-thon ( so excited that I wrote super excited, as a 5th grader would).   I have what feels like a million goals:

Since receiving a Word A Day Calendar, I’ve decided to write a short something including my new word each day.

I am more and more terrified that Donald Trump will become regnant.

Because they say if you write them down and share them, it’s more likely to happen.  Let’s see, shall we?   Not really in order because then I’d have to think about prioritizing and coming up with a prioritization system could blow half the year.  The first thing I did was change this whole site to look better just so I could start fresh for this post.  You see how I allow myself to get distracted??

This northern gal once visited Charlotte, NC where she saw a historical landmark sign indicating ‘President Davis slept here’. I thought: we never had a President Dav….. OHHHhhhhh.

I have a theory on Harper Lee, and it probably won’t be popular, but I kind of hope it’s true. I think Go Set a Watchman was the story she wanted to tell or the story she needed to tell to work through her own issues. Because she is a person raised in a small town, who goes off the New York and sees the the world differently. How disappointing to be disillusioned with a place you once loved, a society you believed in, a father you loved so well. Her society, how she was raised, her childhood itself that tarnished now. How to go on? Certainly long, rambling rants against the injustice of it all is one way!

After pulling off the feat of writing a novel as a first time author, and one with many lovely passages, then to be told that the flashbacks to childhood are more interesting, to be asked how did Atticus become such a hero, what did young Scout see to believe so much in him, in her world ? And then this idealized version of the person who hurt her, who let her down so much becomes a hero to the world? What happens when you are acclaimed, win the Pulizer Prize and all the rest by portraying potentially your biggest heartache as idyllic? You become a recluse, lapse into Boo Radley mode. Why not. He didn’t like the world he saw, and nor do you. And now, in your advanced years, sister is gone, you think: I’m going to tell my real story, of how the south let me down, how even though my father is flawed, I can still find a way back to love him. He’s a character from his time, fighting for life as he’s always known it.

This is a flawed book, that certainly could have improved with an editor. But it’s also a thought provoking book, a book that makes one feel things, think about who Scout and Atticus are, who you are, which is what makes literature great. So those of you ranting and raving at the disappointment of this different Atticus, aren’t you feeling the same things Scout is feeling? The rants I’ve heard and read rival Scout’s in the book. Good! Feel the feels! I do, and I’ll be thinking about this book for some time. That and wondering what ever became of Boo…

You aren’t, either.
Today my copy of Go Set a Watchman arrived… finally (one whole day after release, the torture). I may never pre-order a book again. Then again, it could just be I shouldn’t have pre-ordered this book. You see, I’m on a sort of internet black out, at least a bookish internet blackout and since I adore the bookish internet, this is torture. I am not reading reviews, discussions of reviews, spoilers, other’s opinions, anything, until I’ve read it. I haven’t read one word, yet, and if it’s poorly written or horrible in some way, I will be sad, but still fascinated because we’ll get a glimpse into the difference between a first ‘finished’ draft and what it became: the creative/editorial process at work!

I was attempting this, but I do scan the front page of the New York Times every day, so I know, I read, I processed. Really dumb, NYT, really dumb. You know what you did.

Ok, one spoiler coming. If you are somehow completely off the grind (and yet reading this.. hmmm), and don’t know, the NYT has spoiled that Attitus may be a racist, in the headline of the review no less. Again: really dumb, NYT, really dumb. What do I think about the perfect father and lawyer, not being ever so perfect? A. He’s a white man, in the south, in the 1950s… he’s not unusual. B. He should also be in 70s by the time of Go Set a Watchmen. I’m sure we all know older people with views different than the current times, and we still love them. C. He’s a human being, thus by definition not perfect and what is literature, but a device to hold a mirror to ourselves? To Kill a Mockingbird was a fairly unflinching look at a town at a period of time, why should this be different. If we ignore our past because we don’t like it, we are dishonest. Frankly, it sort of makes me like him more because he still did the right thing.

So, I can’t wait… and I hope you can’t, either, and won’t let something like an imperfection deter you. Plus, Scout all grown up and living in NYC!

And so I return home after another wonderful BEA. Here is my two day haul:
Day 1 (Thurs) 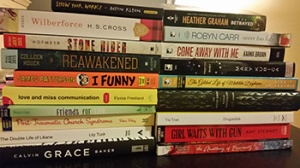 All this certainly looks like less than it felt like when carrying it or rolling it down the street in this bag, which was completely stuffed, and another entire tote bag.

I will not be attending Book Con because of last year’s experience. Being herded like cattle in a small, sweltering space just isn’t for me. I hear some of the issues have been resolved, but I’ll reserve judgement until this year’s attendees weigh in. Wait.. maybe not. I’m not sure I want to hear about things I’ve missed. 🙂 I’m already sad about missing Nick Offerman, and I’ve avoided knowing who else is there so I’m not sad…